This post is inspired by the new FiveThirtyEight primary forecast. It might be tempting to forecast the likely outcome of the primary by looking at the current polls, where they ask people who they would vote for today. As Nate Silver describes in the description of their forecast, this approach ignores a lot of complicated nonlinear dynamics. Reality has path dependence: candidates may drop out, there are discrete thresholds like requiring at least 15% of the vote in a caucus, and a candidate’s “momentum” influences their future success.

One of the more insightful comments in Silver’s post is that their forecast gives Joe Biden only a 60% chance of winning Delaware, his home state where he is very popular. In fact, were the election held today he would have an almost 100% chance of winning Delaware. The problem is that Delaware votes relatively late, and it’s possible Biden will have dropped out of the race by that point. This is nonlinear path dependence in action. In a scenario where he’s still in the race, he gets most of the vote, but he gets no votes if he’s dropped out.

Our goal in a forecast is to describe not just the most likely outcome, but quantify our uncertainty with a probability distribution. It would be very hard to capture these dynamics with a model that could be solved analytically. This is why the FiveThirtyEight forecast uses Monte Carlo simulation with a realistic model. As described in the post, they carefully model the reality of how the voting process actually works, along with a lot of assumptions about people’s voting behavior. They then run thousands of simulations with the model. Each simulation is a hypothetical reality. If we plotted a thousand paths of Joe Biden’s vote share, we’d see he usually does well once Delaware is reached, but on a few hundred paths something happened early on and he dropped out.

Monte Carlo simulations allow us to generate probability distributions of highly complex situations without that much effort. In this post, I create a model of the Democratic primary which is much simpler than the FiveThirtyEight model, but still incorporates the features I talked about. The voting mechanics in the model works as follows:

These parameters I chose are pretty arbitrary. The FiveThirtyEight model, in addition to being much more realistic, calibrates their parameters based on current polling data and the results of historical primaries. They also update the forecast in real-time as new data arrives. It’s an impressive undertaking.

We need to implement the vote distribution behavior. This is a little more complicated than it seems. The order in which the candidates are eliminated matters. If candidate 1 and candidate 2 both have < 10% support, eliminating candidate 1 may save candidate 2.

To check how our simulation works, let’s plot a sample primary with a 50% goalpost marker. 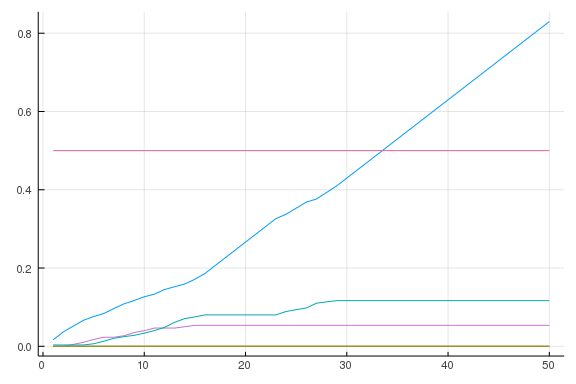 In this sample, the blue candidate won easily. Everyone else drops out fairly early.

Now we are ready to do Monte Carlo. I simulate 100 primaries and plot candidate 1’s total votes for each one. 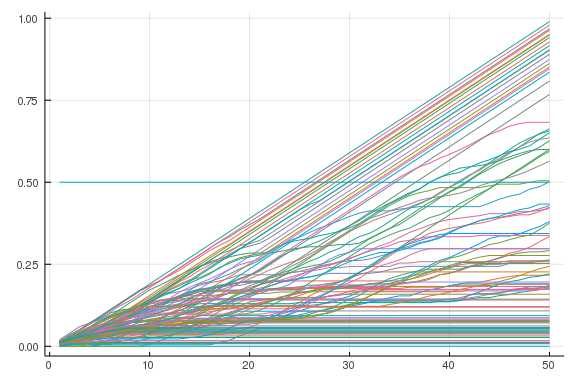 The dynamics I discussed above are reflected here. In many cases, this candidate simply has a poor start and drops out early. The simulated data tells us the entire (approximate) distribution of outcomes. We can use it to compute any statistic we want. The most obvious question is, who will win the primary? We compute that by counting the number of times each candidate wins.

This tells us that candidate 1 has a 31% chance of winning the primary. Still, even the weakest candidate wins 3% of the time. The number 0 represents that no candidate won a majority.

Coming back to the example where Joe Biden may lose Delaware, we can condition our simulation on some event. It’s easy to condition when doing Monte Carlo. Simply exclude all paths where that event didn’t happen, and do your analysis as if that were the universe of possible paths. Let’s condition on the event that candidate 1 has less than 30% of the current vote share after the 10th state. 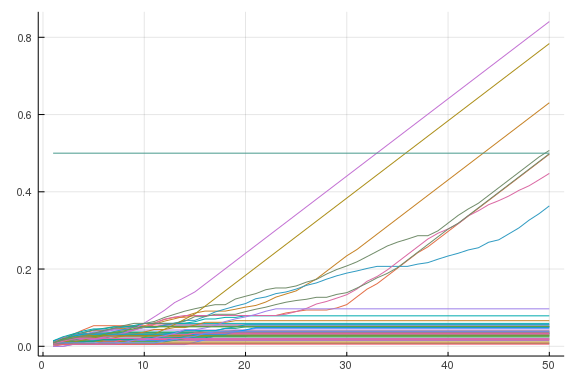 We see that if candidate 1 has a poor start, he likely drops out. However, it is not entirely hopeless. In a few of the paths he bounces back.

Who would benefit from candidate 1’s misfortune?

Candidate 2 goes from a 17% chance to a 30% chance of winning in this situation.